Dog drinks a lot of water? (That's what's behind it)

You finally want to know and understand why your dog drinks so much and needs to urinate so often? There are many reasons, some are normal and harmless and others should be treated urgently. So that you finally know how you should act, I have written this guide. In addition, at the end you will find a great form to determine the water needs for your dog. 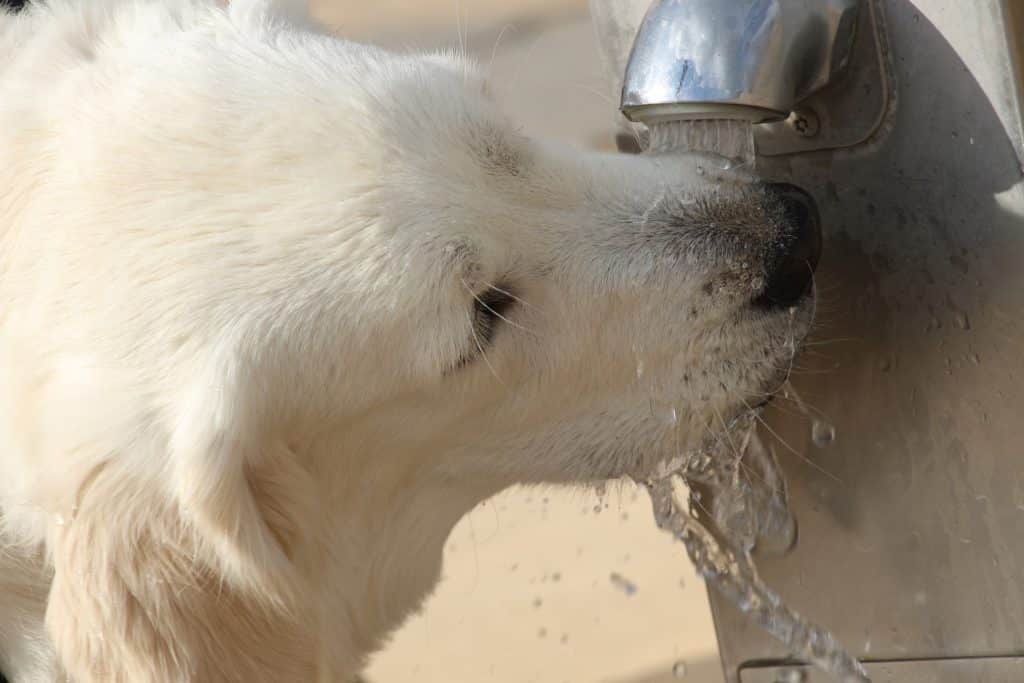 Why does my dog pee a lot?

Water letting varies from quadruped to quadruped. Are you worried that he might be sick? Then you will find below in the last section a checklist with which you can find out the optimal drinking amount of your protégé.

Drinking plenty of water does not have to be bad. Our dear four-legged friends, like all other living creatures, need sufficient drinking water to survive. Water is necessary for all bodily functions.

During this process, some toxic or unnecessary substances are split off, passed to the kidney and excreted through the urine.

Therefore, in the first place, it is not bad if your protégé pees a lot. Just in the Age your pet needs to urinate more often.

Water also plays an important role in cell metabolism and the regulation of body temperature.

Part of the water is absorbed through food. Drinking water is responsible for the remaining amount needed by the body.

How much water does my dog need? 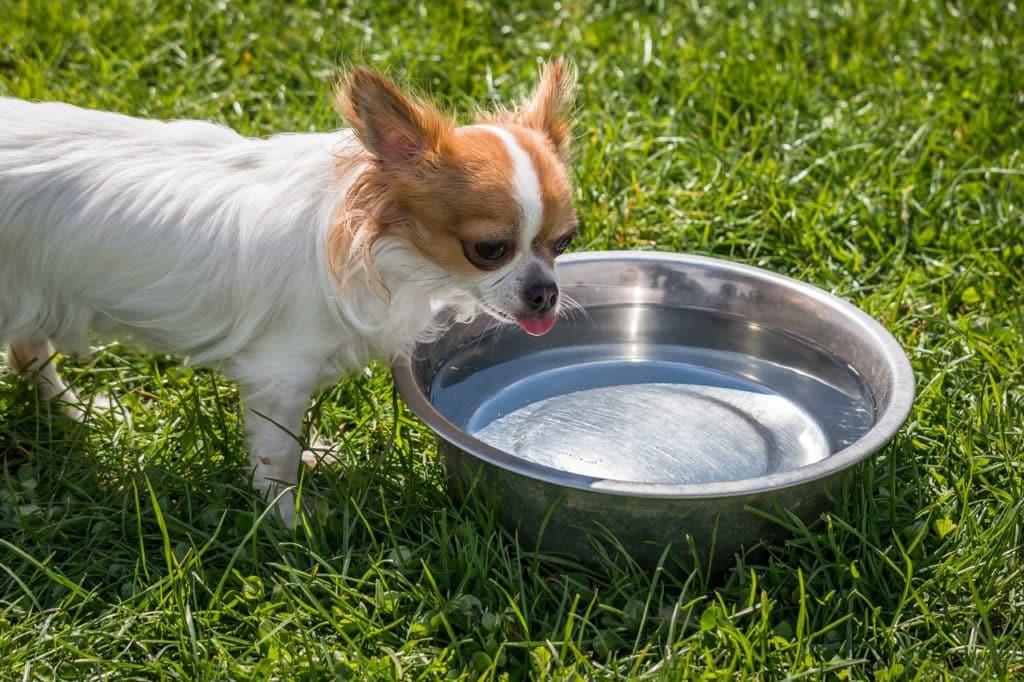 In order for the body's functions to be maintained, the water supply must be regular and constant. The fluid excreted via feces, urine or respiratory tract must be freshly "replenished".

Approximately how much water your furry friend needs depends on the following factors:

Please note that these values are only average recommended values.

Every quadruped has its own individual water requirements. So it may happen that the usual thirst of your protégé may be below or above average.
You should never give your dog less water than he needs. He must have enough fresh water available at all times.

Why does my dog drink more water than usual?

If your protégé drinks or urinates more than normal, it is called polydipsia or polyuria.

In most cases, the cause is polyuria.

There may be times when your four-legged friend drinks more water. This is not necessarily a cause of illness. For example, on days that are very hot or when your pet is more active than usual. In such circumstances, quadrupeds react just like we do and drink a lot of water.

Stress-related or even psychological factors can also cause your charge to drink more water.

Fever, vomiting and diarrhea will also increase the need for water. His body will regulate the loss of fluids through increased thirst.

In these cases, your faithful companion will drink a lot of water, but he will not urinate more than usual.

As long as your foster's increased drinking does not extend over many days and is caused by external circumstances such as heat, more activity, or a move, you have nothing to worry about.

If his drinking pattern has not regulated in a few days and other unusual signs appear, it is a good idea to determine his drinking needs. Other accompanying signs would be:

You can make the investigation if his general health condition does not deteriorate acutely. If there are other symptoms such as vomiting, weakness, listlessness or similar, then you should immediately contact your veterinarian.
The most common causes are:

Diabetes is a metabolic disease. It usually occurs in the second half of life. The body no longer has enough insulin to lower blood sugar levels. Or it is resistant to insulin, so that the body's cells do not respond to insulin.

If the pancreas no longer produces enough insulin, the glucose can no longer reach the cells for further processing. Thus, the blood glucose level rises.

Due to the high blood sugar level, the sugar molecules go into the urine and deprive the body of the necessary water. This increases your four-legged friend's urge to urinate and he has to pee more often. This in turn leads to an increased need for water.

The reason for cystitis is usually bacteria. They enter the urinary tract through the genitals.

Another cause of cystitis can be urinary stones.

If cystitis is not treated in time, it can spread to the kidneys.

Other accompanying symptoms, apart from the increased need to drink, are an increased urge to urinate. However, usually only a few drops come out and your darling is in pain.

The color and smell of the urine are different than usual. Some of the urine may be bloody. Since your foster cannot consciously control the urge to urinate during cystitis, he may not remain housebroken during this phase.

Want to learn more? Then read our great article on the subject Canine cystitis.

Kidney disease leads to increased urination and thirst. The urine is light and clear. Here it can happen that your darling is no longer housebroken because he cannot control his urge to urinate.

Most often, kidney diseases are inflammations caused by, for example, leptospires. In acute cases, the disease is treated with antibiotics.

In acute or chronic kidney disease, the kidneys are no longer able to concentrate urine. As a result, more urine is excreted. As a result, its water requirement increases.

Uteritis usually occurs one week after a bitch is in heat. Older bitches are more likely to be affected.

The cause of uterine inflammation is usually bacteria. Towards the end of heat, the cervix of the bitch is still open. This condition favors the penetration of bacteria into the uterus.

The bitch has a strong thirst and increased urination.

If uterine inflammation is not treated in time, it can lead to blood poisoning, fever, urine poisoning or shock.

How can I measure my dog's actual drinking needs? 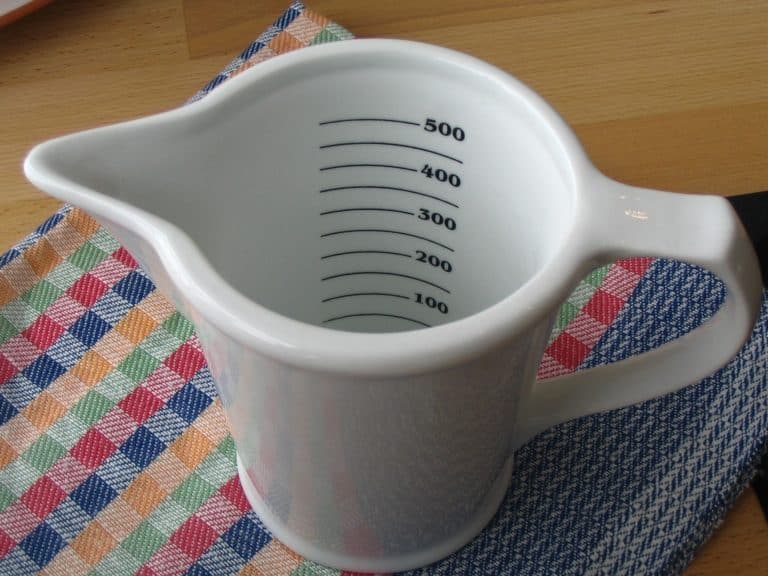 You can measure how much your dog actually drinks on average.

A measuring cup is sufficient for this. To enter the data, I have provided you with a form that you can download as a PDF. You will find it in the next chapter. 🙂

Here you will learn how to fill out the form.

You can do this measurement at home and show the form at your next vet visit. This will help the vet determine if your dog's actual drinking needs are within the "normal" range.

The measurement is taken over three days. The daily requirement is measured within 24 hours.

It doesn't have to be three days in a row. Suppose it is too hot or too cold on one day. Skip these days and take the measurement on a day when the weather is "normal".

This includes days when your pet participates in an unusual activity. This can be, for example, a joint jogging day or a visit to the dog training.

In any case, the assessment days must be routine days of your quadruped.

Please note that your pelt nose gets the same type of food (dry, wet, barf, mixed) on these days. Depending on the type of food, the water requirement changes.

It would be good if you weigh your protégé on the measurement days. You need the weight values to calculate the average water requirement / kg body weight at the end.

It is important that you provide enough water for your four-legged friend at all times. 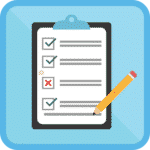 First you enter the start time and date. Then you fill in the remaining data such as weight, type of feeding and temperature.

Each time you refill the bowl with fresh water, you enter the refilled amount in ml. To do this, use the corresponding row of the "Given amount of water" column. on page 2 of the form.

If you need to empty the bowl, also write down the amount on the same page in the corresponding row of the column "Amount of water taken away or remaining".

After 24 hours (end time), note the amount left in the bowl.

Then add up the amounts that you have filled into the bowl in the 24 hours. This gives the sum of the "given amount of water".

Add the quantity emptied from the bowl during the 24 hours with the quantity left at the end. This gives the "amount removed or remaining".

To calculate the water requirement per kilogram of body weight, proceed as follows:

Enter the result at the bottom of the first page in "Water requirement / kg body weight".

Conclusion for Housetraining a Dog

Water is essential for life, no doubt about it!

However, if there is excess demand, it can be an alarm signal that you should not take lightly. Especially when this need with our loved ones extends over several days.

If this is the case with your protégé, I recommend that you determine his average needs.

Observe him very well. If you notice that he urinates more often and for longer periods of time, in addition to the increased need for water, then visit the vet.

According to your information, he will initiate the appropriate investigations to find the cause and treat it immediately.

Kleintiermedizin.ch - My dog drinks a lot
Tierambulatorium.mannswoerth.at - Water also necessary for our animals!
Petmd.com - Why is my dog drinking so much water? 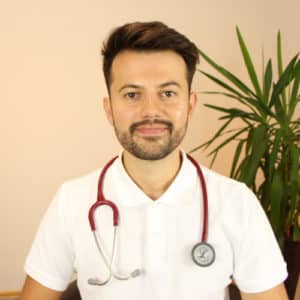 Canine cystitis [symptoms & treatment].
Why exactly do dogs pant? (5 causes & tips against it)
Dog food test 2022 (The 50 best in comparison)
6 things that should not be missing in any dog pharmacy