Herniated disc in dog (cause & tips)

It's not just humans who suffer from a herniated disc, your beloved dog can also suffer from this painful condition. In this post, you'll learn how a herniated disc occurs in dogs, which breeds are most at risk, and how to best relieve symptoms. In addition, we have for this article Advice from veterinarian Mag.med.vet. Emin Jasarevic obtained. Note: This article is written for the german country. 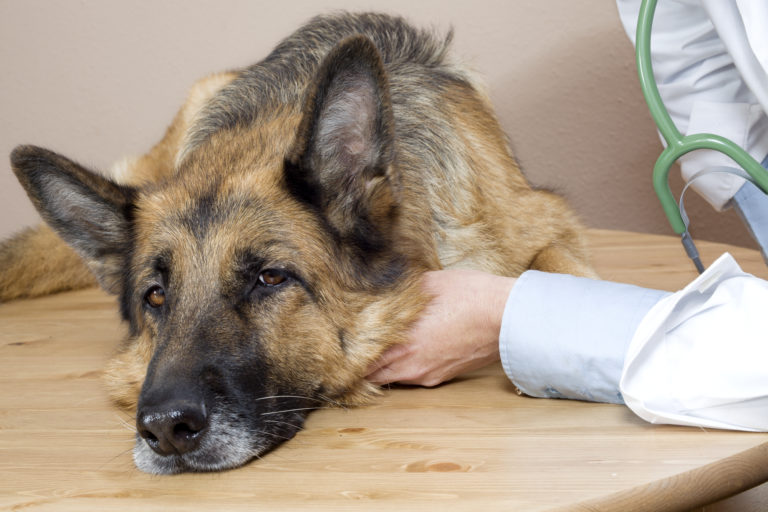 What is a herniated disc?

First, you should know the rough structure of the spine in dogs:

In addition, depending on the breed, there are between ten and 23 tail vertebrae.

Between each of these bony vertebral bodies are the soft intervertebral discs. They function as shock absorbers between the vertebrae, so to speak. If you've ever had a slipped disc yourself, you'll know how painful it can be.

The disease also means immense agony for your animal. Therefore, do not wait too long and consult a veterinarian as soon as possible if you suspect it.

The spine of man and dog is identical

The structure of the spine is identical in dogs and humans. The intervertebral discs are located between the individual vertebral bodies for protection. They consist of a gel-like mass on the inside.

When this leaks out and presses on the spinal cord, it causes one hell of a pain. You should not confuse a herniated disc with a bulging disc. The latter can also cause severe pain.

Basically, a herniated disc affects dogs at any age.

The causes of a herniated disc

Some breeds of dogs are more prone to developing a herniated disc.

Breeds with a long back and comparatively short legs, such as the Dachshund, are particularly at risk. These breeds also include the Pekinese and the Basset.

However, short-legged dogs are not the only ones susceptible to a herniated disc. Quadrupeds whose lumbar region slopes slightly are also at risk.

The same applies to all breeds with a long cervical spine such as boxers and Rottweilers. In these breeds, the herniated disc then often occurs not in the lumbar vertebrae, but rather in the cervical vertebrae.

Similar to humans, however, the following also applies to dogs: About three quarters of all herniated discs affect the thoracic/lumbar region. Only about a quarter, on the other hand, are herniated discs in the cervical region. 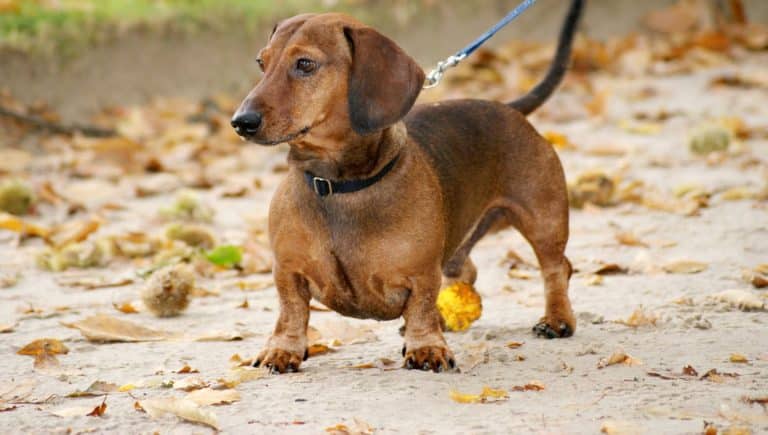 Similar to humans, a herniated disc in a dog usually occurs as a result of a sudden movement. For you, of course, this is difficult to recognize.

Possible symptoms of a herniated disc are then a sudden lack of movement and a curved back.

Your protégé goes into a kind of protective posture, but this usually makes the muscles even more tense. If you put your hand on his back, you may even be able to feel this tension. Often the affected areas also feel a little warmer.

It may be that he then reacts very sensitively in these places and would prefer not to be touched at all. Depending on the pronounced pain sensitivity, your darling may even howl briefly at certain movements.

Paw dragging is also quite typical. For many quadrupeds, this will cause the claws completely scuffed. The better you know your pet, the sooner you will recognize the symptoms of a herniated disc. They always depend entirely on which vertebrae are affected.

If nerves responsible for the sphincter are affected, incontinence can also be the result of the herniated disc. Particularly severe diseases may even be accompanied by complete immobility or paralysis.

If you notice any changes in your pet's behavior, see a veterinarian as soon as possible.

Is it really a disc prolapse, as the herniated disc is called in medical terminology, the dog must be immobilized immediately.

A severe herniated disc, which already causes paralysis, can cause permanent and irreparable damage if left untreated.

In genetically predisposed dogs, disc herniation most commonly occurs between the ages of four and six.

These dog breeds include:

Of course, all other breeds can also suffer from a herniated disc.

The risk increases with age.

What does the vet do?

If you suspect a slipped disc in your pet, do not wait too long and consult a veterinarian as soon as possible. The treatment should take place at the latest 24 hours after occurrence, so that consequential damage can be excluded.

The veterinarian will first find out exactly which vertebrae are affected. This involves neurological examinations as well as imaging procedures such as CT, MRI and/or X-ray.

These examinations are somewhat more complicated in dogs than in humans. Since the animals do not hold still during the examination, they usually receive general anesthesia.

As a result of the above examinations, the veterinarian will describe to you the degree of disc herniation.

Depending on the severity of the herniated disc, the veterinarian will then suggest a treatment for you.

Grade 1: Symptoms are based only on pain and tension of the muscles

If you touch the dog's spine, it reacts sensitively. Especially during defecation, you can see that the dog arches its back slightly upwards.

These are signs that he is in pain and is trying to relieve it in his own way or to "get out of the way". However, this has the disadvantage that he tenses up in the process.

Thus, over time, the muscles harden, so that we can speak of tension. To avoid the unpleasant pain, it also happens that the dog is not as agile as before and does not want to move.

At this stage, you can already tell from the dog's posture that he has disc problems. His stance is disharmonious.

The movements of the limbs are no longer coordinated when walking. Either the dog walks as if it had swallowed a stick or wobbly, as if it had awoken from anesthesia.

At this stage, the muscle weakness is already clearly visible. When positioning the paw in an abnormal position, the dog is no longer able to straighten the paw back to the natural position or needs a lot of time to do so. The dog needs a standing or walking aid.

Grade 4: Complete loss of function of the limb in question (paralysis, plegia) with deep pain

Pain that is not triggered on the skin is called deep pain. The stimulus comes from the muscles, connective tissue, bones or joints. At this stage, severe paralysis occurs. The dog is no longer able to stand up independently, hold its urine or defecate.

Grade 5: Complete loss of function of the limb in question (paralysis, plegia) without deep pain.

The dog can only move in the fish seal position. It no longer feels any pain, as injury to the spinal cord has already occurred. The longer the deep pain fails, the higher the probability that recovery is no longer possible.

In the case of herniated disc, physiotherapeutic measures are  quite useful as a supplement. However, these should only be started when the acute phase is over.

In practice, light massages by trained canine physiotherapists have proven effective, as have therapeutic exercises in water. An underwater treadmill is an excellent way for all breeds of dogs to exercise their muscles.

The advantage of underwater training: the spine is not unnecessarily stressed.

Perhaps you also talk to your veterinarian about homeopathic remedies, because these also promise success in the treatment. A veterinary practitioner can also recommend numerous other herbal remedies.

As analgesic and anti-inflammatory are, for example, frankincense and the extracts of devil's claw.

After a herniated disc there should be absolute leash restriction for at least six weeks. All jerky movements and jumps are absolutely taboo. Better than one long walk a day are several short exercise sessions.

How do I prevent?

There are a few things you can do to prevent a herniated disc in your furry friend.

In everyday life, make sure that your protégé no big jumps makes. All movements that could harm the spine should be avoided. This is especially true for vulnerable dogs like dachshunds.

Similar to humans: The stronger the back muscles are developed, the lower the risk of a herniated disc. So take him for walks as often as possible. Of course, the duration of the walks depends on the breed: Of course, dog breeds such as dachshunds or Pekinese require much less exercise than a Labrador or German shepherd.

When walking on a leash, you should put on a chest harnessbecause this puts far less strain on the sensitive cervical spine than a normal collar.

Another immensely important factor: Avoid overweight at all costs. Every kilogram too much only puts unnecessary strain on the spine.

Here is an overview of the most important preventive measures:

A sensible purchase can be, for example, a orthopedic dog bed be. Such a bed is available not only in numerous attractive colors, but also from various materials.

Orthopedic dog beds are usually equipped with a sleeping roll, on which your pet can comfortably rest his head.

A very decisive factor for as long a health as possible plays likewise the species-appropriate feeding. A diet that is as varied and rich in vitamins as possible can also prevent signs of wear and tear on the spine.

Therefore pay attention to high quality lining. Highly recommended are dog foods with the ingredients Chondroitin, glucosamine and hyaluronic acid. Trace elements like Zinc, selenium and manganese on the other hand, support the development of cartilage and are therefore important for his back health.

Whether you give wet or dry food doesn't really matter. When buying the dog food, just make sure that it is as high meat content and valuable ingredients such as vitamins and antioxidants. The proportion of cereals, on the other hand, should be as low as possible.

Of course, despite all preventive measures, it can happen that your pet suffers from a herniated disc. Often, one wrong movement is enough.

Preventing a slipped disc in your dog is not so easy for you as the owner. Of course, he should be moved regularly, because too little movement is one of the main triggers for a herniated disc.

On the other hand, too much sporting activity can also damage the intervertebral disc.

That's why your empathy is needed to find a healthy balance.

7 healthy oils for your dog (that you should know)
Cruciate ligament rupture in dogs (symptoms, causes, tips)
These 5 painkillers for dogs you should know
Detect osteoarthritis in dogs + helpful home remedies