Mice mites in dogs & what you can do about them

The mange: A nightmare for your faithful friend and you. This is a highly contagious disease in which the skin becomes inflamed. The cause are Mites. In this article I explain everything about mange in dogs. What it is, the causes and what you can do about it. Also, for this article we have chosen Advice from veterinarian Mag.med.vet. Emin Jasarevic obtained. Note: This article is written for the german country. 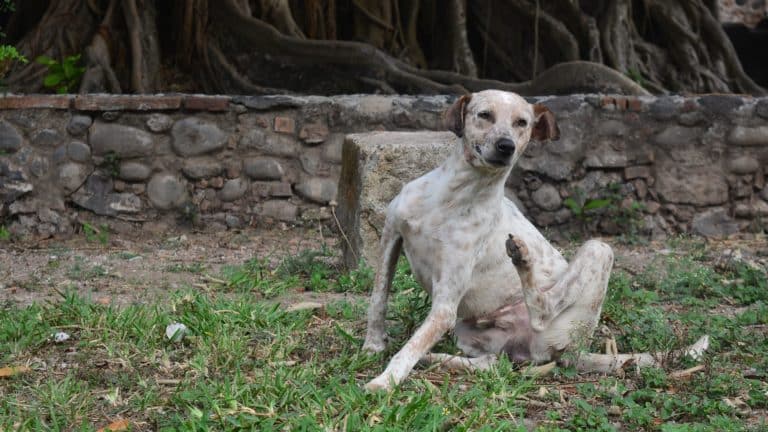 The more you know about it, the faster you can react and protect your dog from more serious plagues.

The mange (lat. Scabies) is a highly contagious inflammatory skin disease, which is caused by infestation of mites. Here there are two types of mange, which often occur: Demodicosis and Sarcoptes mange

In both cases, a corresponding disease is caused by tiny arachnids (Mites), which cause a lot of stress to your darling.

Due to the intense urge to scratch, many four-legged friends additionally painful skin lesions to.

Such a parasitic infestation can be transmitted to other animals and humans. Since the diseased suffer greatly, immediate medical treatment is essential.

The main cause of infection with mange mites is the Contact with other infected animals. The mites move rapidly from animal to animal. Also the contact with infested berths or sleeping places can lead to infection.

The preferred hosts of these parasites are the fox and the marten, and in alpine regions the chamois. Therefore, dogs can also become infected with Forest walks infect

Furthermore, a certain Gene defect addition, the appearance of a specific form of mange and diseases that attack the immune system of your companion.

Mites all belong to the subclass of arachnids. As such, they have four pairs of legs. The smallest among them are only 0.1mm in size.

In addition to vegetarian species, there are also predatory mites that are used in pest control and those that feed on carrion or dead tissue. However, much to the chagrin of other organisms - like your best friend - there are also parasitic species.

As the characteristics of the mites differ, an infestation causes specific symptoms. In the following, I will introduce you to the two most common mite diseases: Demodicosis and Sarcoptes mange

In demodicosis, Demodex mites, which naturally occur on the skin surface of hairy mammals (including humans), multiply rapidly on your four-legged friend. Their preferred habitat is mostly restricted to the hair follicles as well as sweat and sebaceous glands.  Outside of the host animals, Demodex mites are barely able to survive and die quite quickly.

It has been observed that some breeds of dogs are particularly susceptible to the disease.

These include in particular short haired dogs like dachshund, pug, English or French bulldog, terrier, etc. Moreover, beyond these predispositions, there seems to be a hereditary predisposition to give to the formation of demodicosis.

The defect of so-called T-lymphocytes is held responsible for this. These lymphocytes control the population of demodex mites in healthy animals, so that excessive reproduction is prevented.

The pathogen causes damage to the hair follicles and thus interferes with the formation of new hair, so that this form of the disease is characterized either by localized or generalized (all over the body) hair loss characterizes. For the most part, however, a circular hair loss which is often accompanied by a Fungal infestation mistaken will.

In the bald areas of the skin, there is also often a increased dandruff or sebum formation on. In the further course, it can lead to a grayish discoloration of damaged skin areas come.

If a bacterial infection (usually Staphylococcus pseudointermedius) is added, the following may also develop Papules, Redness of the skin and Itching become noticeable.

A special feature of this disease is the Pododemodicosis is the most common form of demodicosis. This can occur as a result of generalized demodicosis or as an independent form.

Characteristic are strong and painful swellings at the paws with possibly additional fistula formation, which your protégé clearly indicates by increased licking.

The diagnosis is made by the veterinarian on the basis of a so-called "Skin scraping.

This involves scraping a portion of the dog's top layer of skin with a spoon or spatula and examining it microscopically. In some cases, however, a skin biopsy may also be necessary.

This is especially true if the paws of the animals are affected or it is a breed with very deep hair follicles. The biopsy is performed either under local or general anesthesia.

The localized form of demodicosis, which is mostly for young animals heals without medical intervention in 90% of cases. Thus, this has a very positive prognosis.

The killing of the mites can be achieved by special Solutions, shampoos or gels take place. Additionally also Tablets should be administered. If there is a secondary bacterial infection, the use of Antibiotics meaningful.

In the case of generalized demodicosis of adult quadrupeds, your veterinarian will try to treat the To find the trigger of the disease. As it caused immunodeficiency and thus favored the overpopulation of demodex mites.

In order to ensure a successful course of therapy, I recommend that you a skin swab at regular intervals to be performed by your veterinarian.

Your furry friend is not considered cured until the result of two skin scrapings four weeks apart is negative. In addition, a further therapy must be carried out for four weeks. If there is no relapse after 12 months, the disease is over.

Sarcoptes mites are resident on the skin surface of their host animals. The female parasites bore tunnels into the uppermost layer of the epidermis of infected animals, where they finally lay their eggs subcutaneously. The eggs develop into larvae after 17 to 21 days.

After some time, the larvae develop into nymphs and ultimately into adult mites. Female mites can thus lay 3 to 5 eggs per day and thus come in their life cycle to an egg production of about 50 pieces per animal.

Without a host animal, these parasites can survive for up to three weeks.

Infestation with Sarcoptes mites can occur both through direct contact with infected animals and indirectly (e.g., through infected objects).

Infection with Sarcoptes mites results in the following severe, excruciating itching, which is comparable with almost no other skin disease. It is also typical that it appears unchanged intensively all year round.

Well recognizable to you as a dog owner, this pathogen is by its basic distribution pattern. At the beginning of the disease, especially in the area of the Ear cups, the Elbow and Ankle joints as well as on Belly small nodules and pustules. In the further course they are found on the Back and Head of your protégé again.

Finally, reddened areas follow, which your protégé scratches strongly. The scratching and biting of the itchy skin quickly leads to open wounds and thus to bacterial infections.

The result is hair loss, inflammation, crusting and eventually a chronic change in the skin, which manifests itself in the form of thickening with black discoloration.

Additionally occur Weight loss, sometimes Changes of character (such as increasing aggressiveness) and restlessness. In addition, an intensification of the symptoms during periods of rest and under heat is typical.

This clearly distinguishes an infection with Sarcoptes mites from allergies, in which an increase in itching during the night is rather unusual.

Since even a few mites are sufficient to cause severe itching, diagnosis is difficult.

However, attempts can be made to detect the Sarcoptes mites by multiple skin scrapings.

If the symptoms are quite clear and the mites cannot be identified from the scrapings, an indirect detection by Blood collection is performed. Here, specific Sarcoptes antibodies are searched for.

However, such an examination method can only be performed 2 to 4 weeks after infection, as the antibodies cannot otherwise be measured.

Diagnostic therapy with a safely effective drug can thus be used to confirm the diagnosis in some cases.

Since these mites can survive for some time outside their host, a Treatment of the environment of the infected animal inevitable. For this purpose, there are special means for sale. However, since a single application is not enough to kill all mites, it must be be repeated several times.

If sarcoptes mange is treated early, your pet will most likely get better quickly.

A variety of highly effective agents (sprays, rinses, spot-on preparations and injections) are available for treatment. However, dogs with very dense and/or long coats may need to be shorn for successful treatment.

Most drugs also require multiple treatments to kill all developmental stages of the parasites.

If the itching is very severe, anti-itch medications can be administered to prevent your foster from hurting himself while scratching.

As is the case with all diseases, you need to react quickly.

Unfortunately, our dear friends do not have the opportunity to communicate directly to us that they are unwell.

That's why your empathy and observation skills are needed here to be able to "communicate" with your faithful friend at all. Thus, you can immediately determine that something is wrong and better classify the symptoms.

The quicker you respond after that and get your vet involved, the easier it will be to heal.